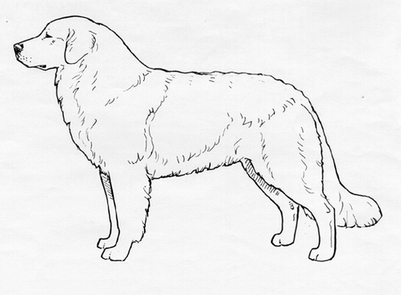 
HISTORY
The Maremma Sheepdog is derived from the ancient shepherd dogs used in the Maremma and Abruzzes regions of Italy. At one time the dogs from these two regions were considered two different breeds, but since about 1860 they have been crossed to the point that they are now recognized as one breed.

The Maremma Sheepdog was recognized by the United Kennel Club July 1, 2006.

GENERAL APPEARANCE
The Maremma Sheepdog is a big, strongly built dog of majestic and rather rustic appearance. He is heavily built, and slightly longer than tall in proportion.

CHARACTERISTICS
The principle function of this breed is as a flock an property guard. He is perceptive and assertive and devoted to his master.

HEAD
The head is large, flat and conical in shape, resembling a Polar Bear.

SKULL - The skull is broad and slightly convex in profile. There is a very slight stop, and the occipital crest is just barely visible. The planes of the skull and muzzle are slightly divergent.

MUZZLE - The muzzle is just slightly shorter than the skull. It is broad and deep at the corner of the lips, narrowing slightly towards the end. The lips are tight and not pendulous.  The lower line of the foreface is defined by the bottom jaw, not the lips.

EYES - Not large, almond shaped, and ochre or chestnut brown in color. The eye rims are black, and the expression is lively and attentive.
Disqualification:  Wall eyes. Complete lack of pigment of the eye rims.

EARS - Set very high, triangular in shape, hanging but very mobile. Small in relation to the size of the dog. Cropped ears are acceptable only in dogs that are actually used in herd guarding capacity.

NECK
Always shorter than the head, thick and strong, arched at the crest and free from dewlap.

FOREQUARTERS
Shoulder blades are long, well laid back, and capable of free movement. The upper arm joins the shoulder blade at an angle that varies from 105 to 120 degrees.

FORELEGS - The elbows are held close to the chest, and are covered with soft, loose skin.  The length of the forelegs is slightly greater than half the height at the withers. The legs are straight and heavily boned. The pasterns are lean and slightly sloping.

BODY
The chest is deep and well rounded. The ribs are long and well sprung. The withers are high and wide. The topline is level to the croup, which is sloping. The loin is fairly long and very broad. There is little tuck up.

HINDQUARTERS
The angulation of the pelvis and upper thigh is approximately 100 degrees.

HIND LEGS - The limbs are straight when seen from behind or in profile. The upper thigh is long, with protruding muscles. There is moderate angulation at the stifle joint. The hock joint is thick and moderately angulated. The rear pasterns are strong, lean and broad.

FEET
Large, with close toes. The front feet are roundish; the rear feet are more oval. Black nails are preferred.

TAIL
The tail is low set due to the slope of the croup. In repose, it is hanging. When the dog is in action, it is carried level with the backline with a hook in the end. The tail is well furnished but not fringed.
Serious Fault: Tail curled over the back.
Disqualification: Docked or natural bob tail.

COAT
Somewhat long, harsh, straight, and held close to the body. A slight wave is tolerated. The hair forms a collar around the neck, and limited fringing on the back of the thighs. The hair is short on the face, ears and front of the legs. On the body, it may be up to three inches in length. The undercoat is seasonal. The skin is tight and thick, with black pigmentation of the mucous membranes as well as the third eyelids and toe pads.
Disqualification: Curly coat (slight waviness acceptable)

General Appearance
Lithe and strongly built. The expression should be one of aloof awareness. This reserve should not be mistaken for nervousness, any tendency to which should be penalized.

Head and Skull
When viewed from the front the head is of triangular shape and in proportion to the size of the body. The skull wider between the ears, narrowing towards the facial area. The head somewhat rounded, with the occupital ridge slightly emphasized. The area under the eyes gently chiseled. Medium stop. The length of the muzzle fractionally less than that of the cranium, and the muzzle slightly tapering without snippiness. The lips close fitting and not pendulous. Pigmentation of the lips and nose black.

Eyes
The eyes bold, neither large nor small; neither sunk nor protruding. The aperture almond shaped. A dark eye preferred. Eye-rims black.

Neck
Neck should be strong, of medium length. Devoid of dewlap.

Forequarters
The shoulders should be long, sloping, well muscled and free moving; the forelegs well boned and muscled without heaviness, straight when viewed from the front, the elbows held close to the ribcage, neither in nor out. The pasterns should show a very slight angle in profile.

Body
The body strong, the muscles well developed, the shoulders slightly above the level of the back, which should be broad and straight, rising to a slight arch on the loins and falling to a broad, strong rump. The length of the body, measured from the point of the shoulder to the point of the buttocks, slightly longer than the height at the shoulder. The ribcage full, descending to the level of the elbows, with well sprung ribs; not barrel-chested. The sternum long, gradually curving up the abdomen, which shows a waist without excessive tuck up.

Hindquarters
The hindquarters broad and powerful, with strongly muscled thighs, legs straight when viewed from behind; hocks well let down and strong, with moderate bend of stifle.

Gait
Movement should be free and active, giving the impression of a nimble dog, able to turn quickly.

Tail
Set low, reaching below the joint of the hock. Hangs down when the dog is quiet, but carried level with the back when the dog is alerted, with the tip gently curved. Well covered with thick hair without forming fringes.

Coat
The coat should fit the outline of the dog and be long, plentiful and rather harsh. A slight waviness, but not curliness, is permissible. It should form a thick collar on the neck. The hair should be short on the muzzle, cranium, ears, feet and front of limbs but should form a slight feathering on the rear edges of the limbs. There should be a thick, close undercoat especially in the winter.

Color
White.  A little shading of ivory, pale orange, or lemon is acceptable.

Faults
Any departure from the foregoing points should be considered a fault and the seriousness with which the fault should be regarded should be in exact proportion to its degree.